In late September I had the great pleasure and honor of being in my youngest sister Rikki’s wedding. I still remember when Rikki told me that she was going to study aerospace engineering in college; she had recently visited me in New York City, where I was going to graduate school, and I was so excited for her and proud of her.

Unsurprisingly, she excelled in her course of study, and along the way she was auspiciously paired up with a lab partner–another aerospace major–who respected her, shared her sense of humor, and eventually asked her to marry him. First however, the two of them focused on their careers, enduring a long distance relationship (with her in Oklahoma and him in Dallas) and eventually settling together in the Dallas/Fort Worth area. Their careers took them cross-country last year, when they both scored jobs at Virgin Galactic’s Spaceship Company, so now I can say that my little sister is officially a Rocket Scientist (did I mention that I was proud of her?).

Obviously, I started planning a quilt for them as soon as I heard about their engagement. I immediately thought of the phrase “It isn’t rocket science” and knew that I would use my text pattern from Modern Applique Illusions to turn that on it’s head for Adam and Rikki.

I used my favorite Oakshott cottons for the appliques and binding in colors to match their living room. I had been collecting fabric to make something for Rikki and Adam for a while, so I already had the perfect fabrics for the backing in my stash.

I tried without luck to take a decent photograph of the quilting, which was inspired by Art Deco-style images featuring geometric clouds and streaming rays of light. I thought this would harmonize well with the retro style that Rikki and Adam chose for their wedding stationary, which was designed by my other super-talented sister, Scottie.

Never ones to settle for bland tradition, Rikki and Adam decided to, ahem, “update” their unity candle ceremony by launching a hand built rocket (which the hotel staff were amused to see them assembling in their room on the day of the ceremony). 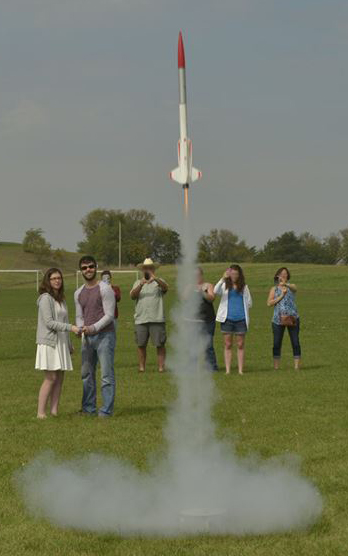 Thanks for reading, and for helping me celebrate what I’m sure will be an incredible future for Rikki and Adam!

One thought on “Rocket Science”

I love hearing from my readers, so thanks for considering leaving a comment. They always make my day! Cancel reply 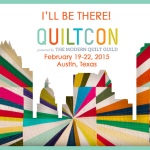